The coming of January here in Langkawi is marked by strong winds and long hot days, coupled with once or twice a week of short showers. For the past 3 years since I began my own practice, January proved to be the most productive time for the studio. Ya Allah, Al Wahab may this month be a great beginning for all of us. Ameen. View of Bukit Sawar and a deciduous tree.

With the majestic backdrop of Bukit Sawar, the lonely emergent tree that breaks the blue sky never fails to stop me in my tracks. If one knows of one's biological-clock, other creatures around us, like this tree, has its own too. This tall tree, which looks like a Pokok Keruing to me (correct me if I'm wrong here), is the Gunung Raya’s kemarau-clock; as it lets us know the arrival of the dry season. Once a year, when the temperature peaks, true to its deciduous nature, its leaves turn orange-red, yellow and then sheds them all away. Less than a fortnight later, hints of young leaves begin to sprout and the circle of life repeats.

In Langkawi, there are a few rainforest trees that shed their leaves annually. Sengkuang, Keruing, Meranti to name a few.This ‘deciduous’ nature is an adaptation of course, to conserve the moisture in preparation of an extended dry season. Yes, I enjoy nerding on the canopies and emergent layers of our rainforests every now and then. One particular emergent tree beside our place (see photos) will have the most beautiful foliage once its leaves turn yellow and red. Autumn in Gunung Raya, mashaAllah! Within a few seconds, the strong wind could strip its branch naked. A very precious moment when one of us would witness this. My mom, Puan Normal (known to many of her students) would describe the strong wind in January as an indicator of ‘peralihan musim’ (season’s transition) has arrived. ‘Dia dah mai dah’ .

The image on the right is the before shot (an autumn vibe), and left image the after shot (fall vibe).

Did you know, Langkawi’s diverse flora and geological history is made up of different forest types such as Littoral Forest, Lowland Rainforest, Heath Forest, Mangrove Forest and Forest on Limestone? Sorry! How mouthful. Due to thousands of years of isolation from the mainland, this island is simply a laboratory for evolution! It is no surprise it became a haven to a significant number of rare and endemic species such as Lagerstroemia langkawiensis (Bungor Langkawi), or peninsular Malaysian ones, such as Brown-winged Kingfisher, Black-hooded Oriole and Mountain Hawk-eagle.

FYI, Bungor Langkawi is part of my Pokok-Pokok Card Series!

Who would have thought the moringa tree bears its own fruits (long beans or kacang panjang) once the dry season arrives? My parents waited for 5 months or so, restraining themselves from pruning the tree behind our house (unless it is for cooking a dish of sayur masak lemak). Time passed by, the trees bloomed new flowers after another, carpenter beetles and other pollinators came and go until finally in mid January, 3 cm long moringa beans dangled from the tallest branch. We observed daily, almost obsessively from our bedroom window & kitchen. A month later, it grew exponentially into a foot long, if not more. This to the shock of my mom who thought she had seen a whip snake (vine snake, ular daun, ular pucuk or the likes), casually sunbathing on our moringa branch! 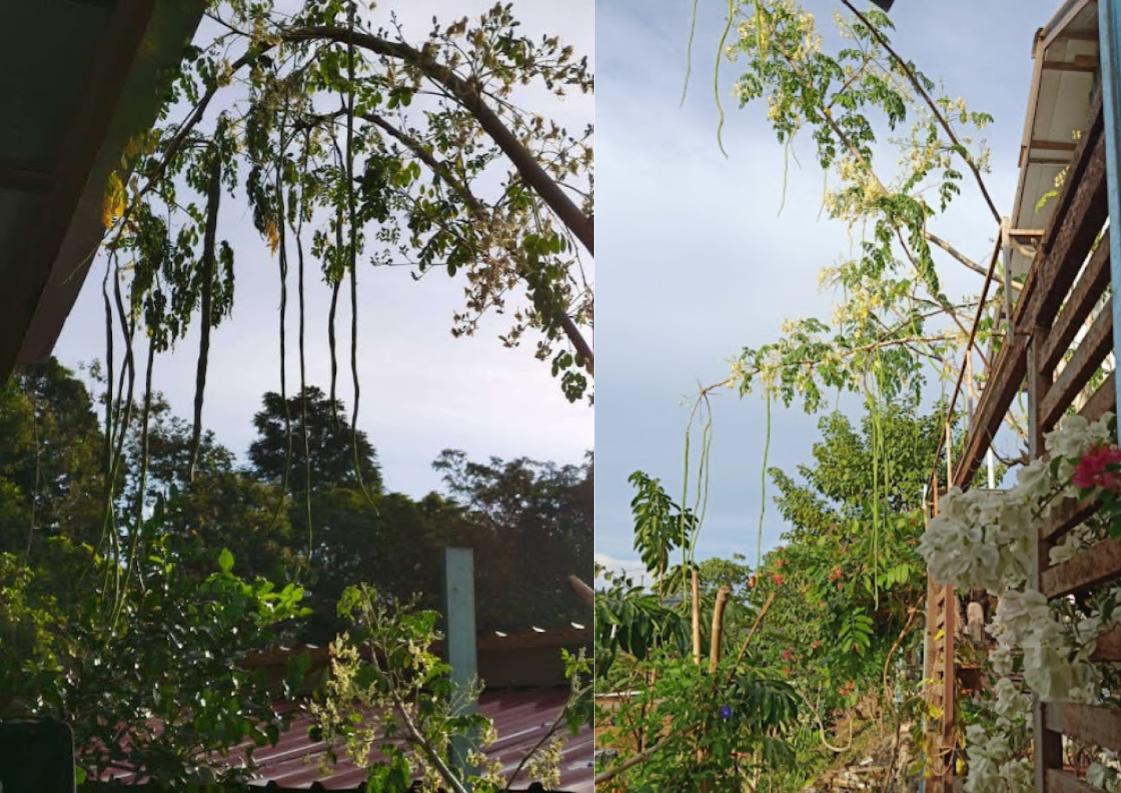 Some shots of our family’s moringa tree. Gathering enough mature moringa beans, it’s only time to cook my parent’s favourite dish from their childhood days. Behind the scenes in the kitchen.

Sorry, dear readers. By the time the dish was served, no one remembered to take a picture. Pretend the picture from the net below was the one we cooked ourselves. The cyanotype images are to commemorate the first dish! Yeehaw! It became an art submission to Urban Biodiversity Initiatives (UBI) Plant to Pinggan Campaign! Freeing 2 birds with 1 key! The final days of January are numbered in preparation of February’s workshop & group photography exhibition by Exposure+. Mentally preparing to leave the island I’m blessed to call home, however briefly, there’s a sort of heaviness in leaving my parents and the sanctuary behind. The once lush view will be replaced by a concrete jungle pretty soon. Standing in one of the foothills of Gunung Raya, I soak in the silhouettes, foliage and canopy layers one last time.

At some point in our lives, we might decide to migrate elsewhere or depart to a better version of ourselves. For Muslims, when we do this for the sake of our Creator, it is known as hijrah. New year, new resolutions-lah kan, so in my long piles of things to do was reducing my complaining tendency. Being mindful of what and why do I complain (too much). I caught myself doing just that at the end of January and about to have a negative outlook to end this month. Alhamdulillah, for timely reminders from friends, books (and YT lectures! This is also divine interventions, I must say) that pushes me to review my miss encounters to positive lessons in this ‘short’ month.

Encountering either good, bad, worst or best of situation is a blessing in itself. I was prepared to leave January in a sour mood and overlook all the  good things (and good people) I have encountered. Thankfully, I recall a saying that stops my strings of complaints. I think my family and friends were relieved when I did.

Indeed, there is always a reason why we encounter unfavorable people or situations in our lives. Let’s chalk it up as an experience and lessons for the future to come. Bad jujus, don’t stay too long! Be gone soon!

Alas, marks the end of my January reflection. Happy Lunar New Year, dear readers and may you constantly find and BE the ‘light’ for yourself and others around you. God bless!